by susan | Tips for Freelance Writers

If you’re looking into how to make money writing articles, I’m really glad you’re reading this post in particular. You see, while I can teach you how to build a writing business from nothing, I have NO idea how to teach you HOW to write.

I know what I like to read. I know what kind of writing makes me make “that face” by about the second paragraph. I know what my clients like to see in the content my team creates.

There’s a 5-letter F-word that is virtually guaranteed to prevent a writer from making the cut with my team. It’s FLUFF.

You know, like when you’re at word #397 and you’re supposed to deliver 500+ words? Or, when you’ve got nothing of substance to say, and a whole lot of blank space where you’re supposed to be saying it? That’s when many writers rely on fluff to stretch nothing into something… except it’s still nothing – just more of it.

If you want to know how to make money writing articles that people actually WANT to read… scratch that… that people MUST read until the very last word… kill the fluff.

One of my most memorable interactions in college took place in English 202, when my professor would have us come to the front of the class and share with him (while seated in a chair right beside his desk) what our thesis was for the assignment we’d be working on for the first half of the semester.

In nearly every case, my thesis was too long, something my professor had no truck with.

“Smith,” he’d say, “if you cannot explain it in a sentence, you don’t understand it clearly.”

I’d always walk away wondering how on Earth I was supposed to distill my idea into one sentence.

It would be years later, while studying physics, that I encountered a similar quote, often attributed to Albert Einstein [“Unless you can explain it simply, you do not understand it fully”], before I finally understood the message my professor was trying to get across: “The better you understand an idea, and can distill its essence internally, the easier it is for you to share the idea succinctly and clearly to the reader.”

We now live in a world overflowing with words, even as the time we have to read them gets shorter and shorter.

All around we hear, see, and read where people don’t have time to write — yet when they do write, it’s more essay than note. All the while, the folks consuming our content are crying out, “Give me the damn info, already!”

Ann Wylie, one of the preeminent writing and communication coaches in the world, agrees, writing in a recent newsletter: “The longer your story, the less of it your readers will read — and the less likely they are to understand and act on it.”

In fact, she shares research conducted by Wilbur Schramm, who she calls the “father of communication studies,” highlighting the effect of story length on reading:

“That’s the 33% reading gap between a short piece and a longer one,” says Wylie. “Bottom line: The longer your piece, the less of it they’ll read.” 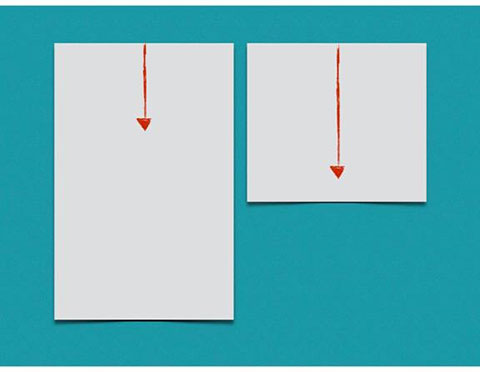 I think it’s time we all took a stand against word bloat, focusing our attention on writing shorter, punchier content.

If you’re in (and I hope you are), I’m going to share three simple tips for creating amazing short content, replete with real-life examples showcasing exactly what I’m talking about.

Where digital can take a cue from print

Let me take them in order:

“We take it as a given that the more information decision makers have, the better off they are,” wrote Malcolm Gladwell in Blink. However, “that extra information isn’t actually an advantage at all … In fact [it’s] more than useless. It’s harmful. It confuses the issues.”

In my opinion, the rise of blogs, where we’re all free to write as much as we like, has helped to ruin great writing. I wish we’d steal from print — where space is anything but free — the notion that each word needs to make a case for its own existence.

Why listen to me?

In some way, shape, or form, I’ve been an editor for more than half my life, going back to college when I was an Opinions Page editor. I’ve since held editing jobs for newsletters, magazines, and websites. I’ve also won numerous writing and editing awards, including from the Associated Press.

Maybe my most fun editing job is the one I have now as the head of YouMoz, Moz’s user-generated content website.

In this role I get to work with hundreds of writers, see thousands of posts, and have meaningful interactions that lead to authors becoming better at sharing ideas than they ever thought possible.

Also, given the high volume of posts we receive, I’ve developed a strong sense of what typically derails a piece. All things being equal, it’s length. In nearly every case — even for content that we eventually accept — posts come in far too long. Sadly, most authors refuse to cut pieces, even for the sake of clarity.

The authors who are up to the challenge typically follow one of three paths:

Instead of using words to tell your story, use screen captures. How-to content is vital in the content marketing space. People want to know how to do what you’ve described. Why not show them?

This works very well for any step-by-step posts where readers would be better served seeing what they are to do.

A few great examples include:

Notice how, in each case, the authors use an economy of words but place a priority on screen captures.

Also, don’t be afraid to use a single image or a short video to capture and share your idea. Not all ideas need the added weight of text.

This was my go-to tactic when I first started blogging for my own site in 2010. I keep track of the information listed in the screen capture in a Gmail draft, but you can use Evernote or whatever note-capturing platform you prefer. (I sometimes capture the initial idea in a Moleskine pad, then transfer it to Gmail later. I like using Gmail because it’s easy to search for my idea when I’m ready to work on it.) 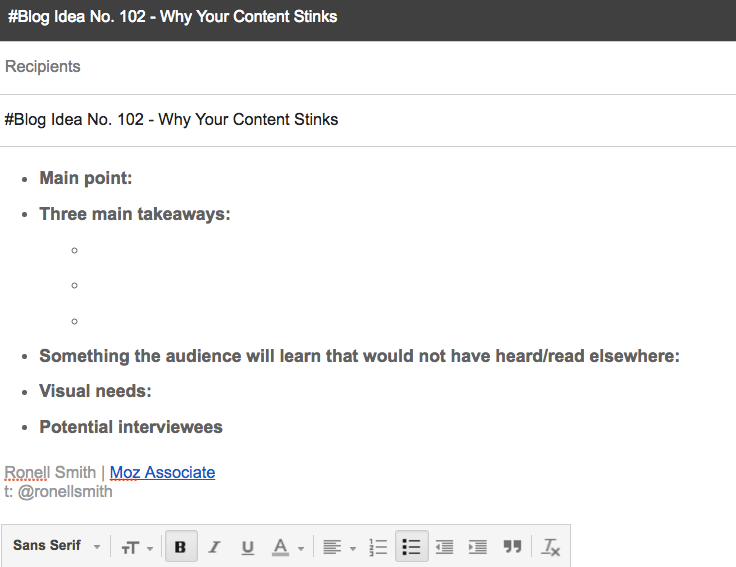 The key element with this approach is that it ensures I have a clear, strong point to make, then can back it up with supporting facts. The real genius of this approach is once I’ve covered my three points, I’m done.

The goal isn’t to write everything there is to write on a topic; the goal is to share sufficient information that leads to learning and/or opens the topic up for further discussion.

If you decide to use this approach/style of post, keep these numbers in mind:

If you’re familiar with the Wall Street Journal, you’ve no doubt seen the treatment they give to the beginning of many of their stories. It’s called an “anecdotal lead,” where you use a real-life person/example to make the reader aware of what the story is about.

The goal is to make them so interested they cannot walk away, but not provide so much information that they don’t read the story.

And by using a real person to make the point, the stories are more interesting, more personal, more memorable, and more likely to be read.

Last year we rolled out a section on YouMoz called called “Here’s How,” where people share how they/their team/their brand did or does something using a story to provide step-by-step details to make the impact real to the audience.

Authors have readily cottoned to the idea of sharing content in this form, in large part because they’re living through the experience, so sharing it with rich detail is easy. They simply share a little of the who and the what, then go straight to the how. In fact, the goal with regard to Here’s How is for 90% of each post to be how-to information.

Speaking of over-telling, I’ve gone on far longer than I’d hoped to with this post. But there’s one final point I’d like to leave you with.

Take advantage of the comments sections on blogs. Instead of trying to cover everything under the sun, use the comments to share additional elements that didn’t have to go in the story itself, but would provide great insight for those who’ve read your content.

By taking this approach, you can leave a little to the imagination in the post, then reward readers for sticking around.

How to Make Money Writing Articles

If you want to learn how to make money writing articles, website content, and other types of content marketing pieces for clients who will hire you again and again, be sure to check out Freelance Writers Bootcamp.